I’ve recently decided to start writing blog entries about a bunch of things I enjoy besides writing. I think this will be good for all of us – you aren’t bombarded with post after post about writing techniques that are probably only situationally interesting to most, and I get to share more of my interests.

I’m starting with a post about Hickory Planked Salmon for a few reasons:

1) I made it for dinner last night, so I have pictures available.

2) I’ve talked to a few people lately about cooking and recipes I like to make, and this is a great place to start.

3) From what I’ve seen, most people eat nasty food and it’s not necessary.

4) It’s likely going to be more useful than me telling you about how much I love Ron Paul.

Okay then, let’s get to it.

The first step will involve the hickory plank. Cedar planking food has become popular lately, but I think cedar is too harsh of a taste, and reminds me of the smell of the wood I have used to build fences. I strongly prefer hickory, which gives a nice sweet smoke that will remind you of bacon. You are supposed to soak the board in water for 2 hours to prevent it catching on fire, but I usually only think to do it 30-60 minutes ahead of cooking, and it always turns out great. I buy these things in boxes of 30 rejects (they are slightly misshapen or have the whole foods brand screwed up on them or something usually) for $40 or so from Amazon.

I start with New Zealand King Salmon, if I can. We get it from Aquarius Fish Market in Downtown Salt Lake City. We like it because it has a very high fat content, it tastes very clean, and it’s raised the right way. Trust me, this fish is worth the $15 or $16 per pound. One pound is likely to feed around 3 adults, so it’s not like you are selling the farm to buy this awesome fish. Aquarius does a nice job keeping their fish fresh, if you are local to SLC. I’m sure coastal towns in particular will have even better options.

They also remove the pin bones – shoulder bones in a salmon… run your finger along the center line of the thick portion of the filet, and you will feel large bones that can be pried loose if your fish people haven’t already. You can see in the pictures of the planked salmon that there’s a rough patch of meat just above the centerline of the filet where Aquarius removed the pin bones for us. Mmmmm, just look at that beautiful fish. Notice the striations of fat between the layers of flesh. This is the equivalent of a Prime marbled ribeye.

Next, I’ll rinse the salmon gently in cold water to remove scales and any fish nasties, blot dry with a paper towel, and brush on as much olive oil as I can make stick to every surface of the fish.

Then, apply salt (I use a combo of table salt and coarse sea salt), pepper, and dill. I also like to add lemon zest from an actual lemon, but didn’t have a lemon last night so I used a store bought lemon-pepper instead. Not ideal because it has a few spices in it I wasn’t looking for, but it turned out great. Dill is really the primary spice here though: I really layer it on. 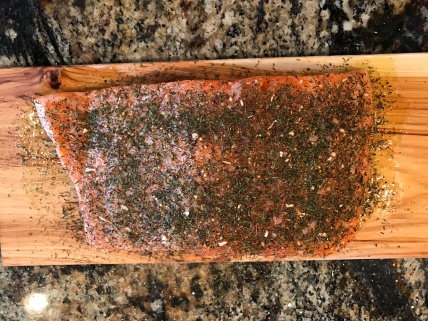 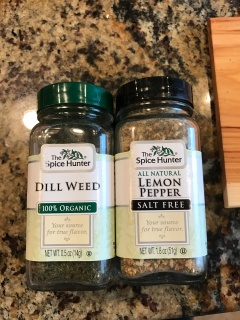 I use a charcoal grill, because I get to light things on fire, and I think the taste is a little better. I also like being able to adjust heat sources at will. This should work just fine with a gas grill, but I’ll assume from here on out that we are using charcoal. I strongly suggest using a charcoal chimney to light your charcoal, and wait until the charcoal at the top of the chimney is lit (glowing red and/or spewing flames) for best results. Sorry the picture below sucks, it was cold outside and I didn’t have a shirt on. Don’t judge me.

Place the hickory board with the thickest portion of the salmon over the hottest coals (but not too near, don’t let your charcoal pile up right under the board), and shut the grill. Leave it on: if you lookin’, you ain’t cookin’. It’ll smoke for quite a while. I find that I have to leave the salmon on the grill for at least 10 minutes, if not 15. Caveat: if it starts billowing smoke like crazy, or if there are excessive heat waves and no smoke, you probably just lit your dinner on fire. Don’t do that. Your board should smoke, smolder, and darken, but not actually light on fire. Try not to have any open flames from your heat source touch your board. With a charcoal grill (this one is a Weber kettle grill that costs $99), you can regulate the air flow to the grill, so it’s really easy to keep it from actually lighting on fire.

I light the charcoal on top of my old ghetto grill 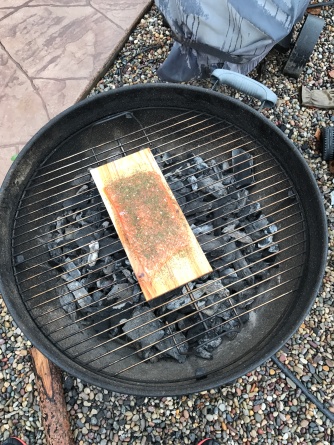 Take the salmon off when the internal temperature is approximately 120-125. Yes, this is rarer than the “safe” temperature, but is the chef-recommended “medium”, and my preferred temp to eat salmon at as well. It’s nice and tender, moist, but not rare. If you want to eat “safe” food, cook it to 145. 145 will work with New Zealand King, but will probably suck with leaner fish, particularly salmons such as sockeye, coho, or even leaner king (chinook) salmon. I use a thermoworks MK4, and it’s awesome for on grill work because of its fast 2-3 second reading speed.

Notice that the thicker side (last pic) of the salmon is slightly pinker than the other, thinner side. The thin side got well past 145. The other end near the darker side of the plank reached 140-145 as well, but the thick portion in the center was around 125 finish temp. This was perfect, as I could give the “safer” salmon to my wife and child, while I ate the nicely medium cooked fish. Again, New Zealand King is the way to go, as it’s delicious even when well-done.

Slip the spatula right between the skin and fat layer

And that’s how it’s done. For a fast, easy side dish, we like to chop various vegetables and oven roast them (tossed in olive oil, salt, and pepper, of course) at 400 degrees. I shouldn’t have to tell you this, but line the cooking sheet in heavy duty aluminum foil for easy cleanup. I don’t know how long to cook the veggies for, but with most of them I look for the edges to start getting brown. I like my sweet potatoes in particular to end up nice and caramelized. For this meal, it was (pre-chopped, so much easier) butternut squash. And we threw some spinach in a bowl and called it a salad.

This olive oil is the best I’ve ever used. Light, sweet flavor with no bitterness.

I estimate that the full cost of everything used, including portion costs of charcoal, olive oil, spinach, and spices, was probably around $25-$30. We fed 2 adults, a child, and had leftovers, so you likely come in around $9-$10 per serving with this entire meal. You can go cheaper, but for value (quality/cost), this meal is probably #1 on my list.